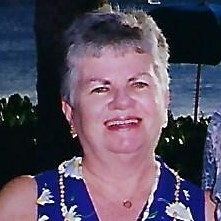 Please share a memory of Barbara to include in a keepsake book for family and friends.
View Tribute Book
Barbara T. Marshall (nee Mooney Howard) 80, of Linwood, passed away February 11, 2019. Barbara was born in Atlantic City to David and Helen (nee Dever) Mooney and lived most of her life in Ventnor. Barbara graduated from Holy Spirit High School in 1957, and remained close to several of her friends from those days. They would meet up for regular lunches, combining two things Barbara loved: talking and eating. Barbara and her first husband, Bob Howard, had five daughters; Theresa, Joanne (Al) Crespo, Donna Howard, Cathy (Dan) McDevitt and Bobbie Howard. After Bob's death in 1980, she found love again with Bill Marshall, and added to her family with stepchildren Kathy and Billy. Bill also predeceased her in death. Barbara enjoyed her family and always remembered every birthday and anniversary. A gift was always met with an appreciative thank you card. She loved the beach, bus trips and going on cruises. Barbara is predeceased by brothers Joseph and Edward Mooney. She is survived by her siblings; Dave (Liza) Mooney, Marguerite (Doug) Beaupit, Jerry and Michael Mooney. She also leaves behind 10 grandchildren; Phillip, Tony, Robby, Lauren, Corey, Emily, Justin, Chris, Andrea and Mike; and seven great-grandchildren. A Mass of Christian Burial will be Celebrated for Barbara T. Marshall 11:00am Friday, February 15, 2019 at Our Lady Star of the Sea Church 2651 Atlantic Avenue, Atlantic City. Relatives and friends are invited to her viewing from 10:00am until Mass at 11:00am. The Rite of Committal will be offered at Holy Cross Cemetery Route 40 in Mays Landing, following Mass. In lieu of flowers, her family is asking that donations be made in Barbara's name to: St. Jude Children's Research Hospital 501 St. Jude Place, Memphis, TN 38105 stjude.org/memorial.1-800-873-6983. Arrangements by the Gormley Funeral Home LLC, AC.