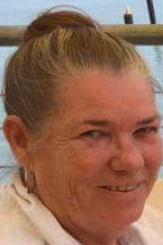 Katherine "Kass" nee McLaughlin,63 of Somers Point passed away unexpectedly Thursday September 20, 2018 at her home. She was born February 25, 1955 in Upper Darby, Pennsylvania to John McLaughlin and Helen Wilkinson.

Kass grew up in Upper Darby and Ellwood City and graduated from Atlantic City High School. After graduation, she traveled the country, lived in New York and studied dance. She moved back to New Jersey and worked at the Atlantic City library and Trump Taj Mahal.

Kass married Lee Kershaw in 1993 and retired in 1995 to raise their daughter, Lena. She was an avid reader, loved learning and could find art in anything. Kass was a fun, friendly face around her neighborhood and made friends wherever she went and was bright,thoughtful and truly kind to everyone she met. She was a great mother, grandmother, sister, daughter, aunt and friend. She will be truly missed.

A Mass of Christian Burial for Katherine will be Celebrated 12noon on Monday October 1, 2018 at St. Joseph Roman Catholic Church 606 Shore Road Somers Point with a viewing from 11am to 12pm. The Rite of Committal will be offered at Holy Cross Cemetery, Route 40 in Mays Landing following Mass. Arrangements by the Gormley Funeral Home LLC, AC.