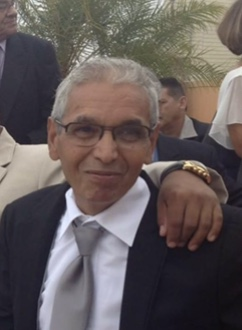 MARTINEZ, MIGUEL ANGEL 58, of Atlantic City, NJ, peacefully went home to be with the Lord on August 31, 2017 surrounded by his family. On October 6, 1958 he was born to Luis Martinez and Arcadia Morales in Ciales, Puerto Rico. During his teenage years he moved to Atlantic City, NJ. There he attended and graduated from Atlantic City High School in 1978. He worked at the Atlantic City Medical Center as a cook and he also worked at Kerbeck Auto Dealer in the auto-detailing department. "Gelo", as he was affectionately known, never forgot his roots. He had tremendous pride for his island, enjoyed cooking Puerto Rican cuisine, listening to salsa music and dancing in the kitchen with his granddaughter. Many describe him as a kind-hearted, hardworking, family man. He adored his mother and was commonly called "the favorite". The bond he had with his mother was like no other. He raised his two sons and set an example of good fathering; he showed them that no love is greater than that of a father for his sons. His greatest joy was being with his grandchildren. They brought him happiness, made his heart smile and were the light of his life. For his brothers and sisters, he'd do anything! He never hesitated to lend a helping hand. His brothers and sisters had such a high regard for him that he was the godfather to many of their children. To have known him, is to know "love of family". He will be greatly missed but his light will live on through them. "Gelo" is predeceased by his father Luis; his sister Luz Mercedes; and his brothers Orlando and Javier. He will be greatly missed by his mother Arcadia; his sons Michael (Katherine) and Mark (Trinh); his grandchildren Mark Jr., Mathieu, Leiliana, Maliyah, and Anthony; his siblings Gloria Esther (Rafael), Angel, Gloria Mercedes, Jose (Dalia), Maria (Jose), Gloria Andres, Carmen (Alex), Nilda, and Abby; and a host of nieces, nephews and extended family. A Mass of Christian Burial will be Celebrated for Miguel Angel Martinez 11:00am Tuesday, September 5, 2017, at Our Lady Star of the Sea Church 2651 Atlantic Avenue, Atlantic City, NJ. All who loved him are invited to call at the church from 9:00am until Mass at 11:00am. The Rite of Committal will be offered at Holy Cross Cemetery, Route 40 in Mays Landing, following Mass. Arrangements by the Gormley Funeral Home LC, AC.

Share Your Memory of
Miguel
Upload Your Memory View All Memories
Be the first to upload a memory!
Share A Memory
Plant a Tree