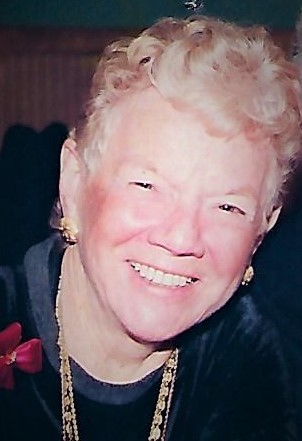 Please share a memory of June to include in a keepsake book for family and friends.
View Tribute Book
June Ross (nee Cramer), 90 years old, of Margate, passed away peacefully on March 3rd, 2021 at home, surrounded by her loving family. June graduated from Holy Spirit High School in 1948 and was named Miss Margate in 1950. After raising 8 children, she began a career at Gordon's Alley in A.C. and then went to work for the Atlantic County Board of Freeholders. In the infancy of Atlantic City gaming, June worked in the executive office of Caesar's Casino and Hotel for 23 years as Community Relations Executive, working closely with Al Cade. June was dedicated to Sister Grace Nolan's Catholic Social Service, the Sisters of Mercy, and to the South Jersey AIDS Alliance. St. Nicholas of Tolentine Church presented June with the Tolle Lege Award for her dedication and commitment to public service. Admired for her selfless and empathetic nature, June had a special gift of sensing those in need. She touched the lives of many, while discreetly helping without judgement of those around her. June and her husband Bill traveled extensively throughout Europe every year for 25 years so Bill could ski and June could see the sights. She was most proud of her grandchildren. Year in and year out, she would pack a dozen of them at a time into a rented jumbo van and take them for stays at hotels all over the country – New York, the Poconos, Florida – anywhere they wanted to go. To them, "NANA" was the coolest. June is predeceased by Mayor William H. Ross III [Bill], twin sons Peter and Paul (stillborn), daughter Colleen Williams, parents Vaughn and Mary (nee Regan) Cramer, sister – Sr. Mary Labouré (Sister of Mercy) and brother Michael Cramer. She is survived by her children John (Bunny) Gallagher, Maureen (John) Helbig, Mark (Pam) Gallagher, Ted Gallagher, Maryann Henson, Rosie (Bill) Hewitt, and Terence "T" Gallagher (Kim), along with Bill's daughter Lisa Strother and her children, Kim Strother and Jason Strother, along with 18 grandchildren and 4 great grandchildren. A Mass of Christian Burial will be Celebrated for June Ross 10:00am Monday, March 8th, 2021 at Holy Trinity Parish, Blessed Sacrament Church 11 N. Kenyon Avenue Margate, NJ 08402. Following Mass, the Rite of Christian Burial will be offered at Holy Cross Cemetery 5061 Harding Hwy (Rt. 40) Mays Landing, NJ 08330. Masks and social distancing protocols are required. In lieu of flowers, friends are requested to make donations in June's name to: The South Jersey AIDS Alliance, 19 Gordon's Alley Atlantic City, NJ 08401 (Phone: 609-347-1085) Arrangements by the Gormley Funeral Home LLC, AC (gormleyfuneralhomellc.com).