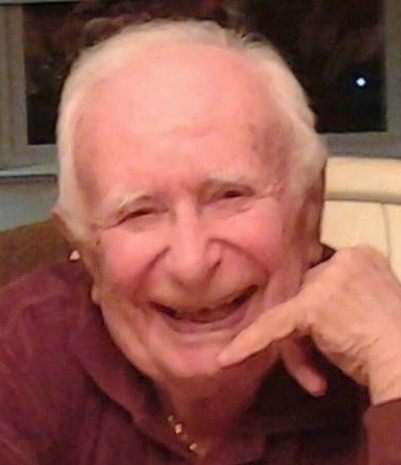 Please share a memory of Pasquale to include in a keepsake book for family and friends.
View Tribute Book
Pasquale "Pat" DeDomenicis passed on to his eternal home very peacefully and serenely in his family home on June 16, 2020 at the age of 99. Pat lived a full life, and is truly an inspiration to all. He came from Italy with his family through Ellis Island and settled in "Ducktown", Atlantic City, New Jersey. St. Michael's became his new home where he always fondly remembered being an altar server with Fr. Quaremba, He attended St. Michael's School with the Salesian Sisters and started working in the Venice bakery to help support his family. He later joined the United States Army and served at a medical base in Brazil during World War II. While on furlough, he married Eleanor (Momootz) Raymond, and then went back to finish his military service. He returned home a proud veteran, that he had been able to serve his beloved country. He raised a beautiful family, well known as the "Dees." He became a hard-working baker, mailman, and even a champion bowler on TV. He taught his children how to crab, which became a long family tradition (even though we much later found out he didn't like crabs). Pat enjoyed bringing his children to drive-in movies, the beach, Birch Grove Park and Lake Lenape. He was a great provider for his seven children while working two or three jobs at a time. He was proud to call all the Salesian Sisters his daughters since one of his daughters became a Salesian Sister. He loved baby-sitting his grandchildren, who were delighted when he danced his famous "Pop Davis" at family parties - and we had many, - including delicious crab and spaghetti dinners. His joy only increased as he delighted in each of his four great grandchildren. Pat will always be remembered as a great man of integrity, faith, faithfulness, and dedication, with his beloved and treasured smile! We are deeply grateful for all the wonderful people who helped our family care for Pat at home in his last years, especially Dr. Holtzin, Dr. Larry, the Jacc Program, Most Holy Redeemer, the Veterans Home Based Primary Care, and Atlantic Care Hospice. Pat has been truly amazing in the way he was able to give and receive love. He certainly taught us all how to live well and how to die well. For sure, God is saying, "Well done, good and faithful servant; enter into the joy of your Master." (Matt. 25:21,23) Pasquale is now enjoying his heavenly home with his beloved wife, Eleanor, his beautiful daughter, Pattie, and his wonderful son, Jimmie, along with his brother/best friend, Lou, and his dear sister, Mary, and their parents. To his children here on earth: Larry and Penny, Michael and Mei, Greg and Stacy, Adria and DJ, and Sr. Loretta, and his grandchildren: Cassy, Mandy, Rosanna, Gregory, Gabrielle and Michael, Pattie and Thomas, Tyler, Chelsea, Christine, Vincent, and his great grandchildren: Bella, Ella, Millie and Libby, he remains a constant inspiration to "live simply, love tenderly, and walk humbly with your God." (Micah 6:8) A family Mass and burial are private at this time, but a memorial Mass will be celebrated at a later date. Arrangements by the Gormley Funeral Home LLC. AC.