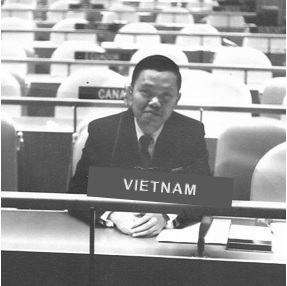 Please share a memory of Ban to include in a keepsake book for family and friends.
View Tribute Book
BAM P. HOANG. Former South Vietnamese diplomat, dies at 89 Ban "Peter" Phung Hoand, of Atlantic City, NJ, died May 28, 2020 from blood clot complications after delaying the inevitable for almost a decade on dialysis. He was born October 3, 1930 in Ha Nam, Vietnam. After graduating from high school, he served in the military until chosen among the elite few sponsored by the United States to study abroad where he studied fiinance at Indiana State University. Afterwards, he returned home to study law at Saigon University where he received his Masters Degree. Mr. Hoang then embarked on a remarkable careerin foreign service representing the Republic of South Vietnam at the United Nations, then in Argentina and Brazil until the demise of South Vietnam in 1975. He settled back in the US where he did various jobs including a stint with the UN High Commissioner for Refugees during the Vietnamese boat people crisis. He has since helped unnumerable refugees settle in the US through personal sponsorhip and many other ways including working with Catholic Charities. He and his wife were devout Catholics regularly attending mass in sickness and in health. Prior to retirement, he utilized his diplomatic skills and experience as an arbitrator for the City of New York where he was a few buildings away from the World Trade Center on September 11, 2001. He retired shortly thdereafter to Atlantic City to play poker, his favorite pastime. Perhaps his greatest pride in retirement was his work with the United States American Volunteers Support Command (USAVSC) rising to the rank of Lieutenant General until renal failure rendered the remainder of his life on dialysis. Even so, he managed to outlive all of his contempories thanks to his displine following a strictregimen and the diligence in care of his loving, devoted wife.