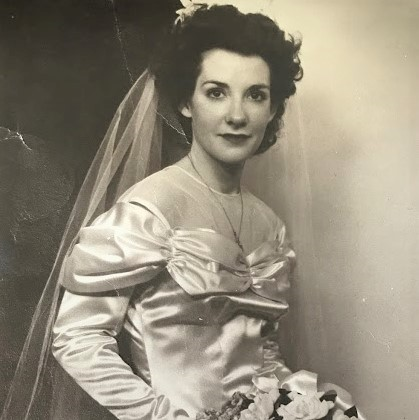 Helen Bernadette (nee Wilkinson), died Saturday, April 27, 2019 surrounded by family, at the age of 92. Helen was born on May 15, 1926, and lived her early years in the East Falls area of Philadelphia. She graduated from Hallahan High School in 1944. In 1947, she married John McLaughlin and together they reared 15 children. During World War II, Helen worked as a secretary on the Manhattan Project in Philadelphia. She returned to government service after rearing her children, eventually retiring as a revenue officer for the IRS. She was a longtime member of St. Joseph Parish in Somers Point, NJ. Helen is predeceased by her husband of 55 years, John; her sons John and Francis; and her daughter, Katherine Kershaw. She is survived by Margaret Tritt, Ellen (James Charles) Sykes, Charles (Kathy), Theresa (John) Cramer, Mary, Cecelia Carter, Elizabeth, James, Suzanne (David) Lempka, Anne Downes, Evelyn (Aaron) Ward, and Joseph. She is also survived by 20 grandchildren and 19 great-grandchildren. A Mass of Christian Burial will be Celebrated for Helen McLaughlin 11:00am Wednesday, May 1, 2019 at St. Joseph Roman Catholic Church 606 Shore Road, Somers Point, NJ. Relatives and friends are invited to her viewings; Tuesday evening April 30 at the Gormley Funeral Home LLC 2706 Atlantic Avenue, Atlantic City from 7:00 pm until 9:00pm and again Wednesday morning at St. Joseph Church from 10:00am until 10:50am, prior to Mass. Interment will follow at the Atlantic County Veterans Cemetery, Route 50 South, Estelle Manor, following Mass.

Share Your Memory of
Helen
Upload Your Memory View All Memories
Be the first to upload a memory!
Share A Memory
Plant a Tree