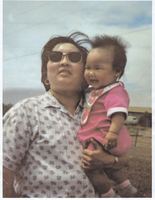 Shirley Bridgette Djambinov passed away on March 24th from a brief illness. She fought her illness as she lived her life, bravely and courageously, surrounded by loved ones. Shirley was born on January 2nd, 1960, to Germaine Djambinov, and the late George Djambinov. Shirley was and always will be remembered as a strong leader, a successful business woman, and loved by so many. She attained her Bachelors of Science double majors. degree from Rutgers University in Economics and French Literature. Shirley spoke multiple languages. She was inspired by her parents and grandparents to strive for the best. With her family by her side, Shirley built an "empire" as her Mom proudly tells everyone that she meets. She proudly carried on her father's legacy and was the anchor of the family. Along with her sister and brother, Shirley operated Plaza Liquors in Ventnor for 43 years. Her ability to develop and realize real estate opportunities were among her many business accomplishments. Shirley loved Arizona, and finally spent the winter in Arizona, in the beautiful home that she built. Shirley had many great attributes, such as her big heart, her ability to look at things logically, and always dotting her I's and crossing her T's before making a decision. Most importantly, leadership and independence were her greatest assets. Everything that she did, she did for those she loved. Religion was very important to her. As a Buddhist, she hosted monks in her home and supported many monasteries and temples. She is survived by her mother, Germaine Djambinov, sister Irene Djambinov, brother Richard Djambinov, and her pride and joys - her niece, Nicole Djambinov and nephew, George A. Djambinov, as well as her aunts and many cousins. On Wednesday, April 1st, at 9:30am, services were offered at Tashi Lhunpo Buddhist Temple in Howell, NJ and interment followed at St. Vladimir's Cemetery in Jackson, NJ. In lieu of flowers, donations may be made to: The "Shirley Djambinov Memorial Fund" at 5215 Wellington Avenue, Suite 100, Ventnor, NJ 08406. Arrangements by the Gormley Funeral Home LLC, AC.