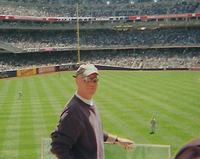 Frank J. Youhas 60 of Atlantic City, passed away at home on April 14, 2019 from complications of the cancer he had been fighting. Frank was born and raised in Johnstown, PA. before moving to the shore. He was a die-hard, win or lose Yankee fan and proud to have attended the Yankee's opening day ceremonies, along with his mother, in the early 80's. A Navy veteran, Frank trained as an aerographer and graduated from the Navy Aerograph School as a Petty Officer while serving in Greece Frank was a long time employee in the Casino industry, starting at the Taj Mahal for 20 years. he worked at the Golden Nugget and lastly, he was proud to be part of the opening of the Ocean Resort. Frank was known for his laid back style and especially his sense of humor. He was well liked, loved and had made many long lasting relationships where ever he worked. Frank touched a lot of lives and he mattered to so many -- he will be greatly missed. He was predeceased by his mother Patricia Louise Youhas and is survived by his loving sister Stacy Youhas. Dear Frank, The bond we had as siblings, the loyalty and the love is known to all who know us. You were a good man Frank Youhas! I am proud of you for the man you were and will always be proud to say you were my brother. I love you! A Memorial Service for Frank J. Youhas will be celebrated at 12 Noon on Tuesday, April 23, 2019 at the Gormley Funeral Home LLC 2706 Atlantic Avenue, Atlantic City. Relatives and friends may visit with his family from 11:00am at the Funeral Home.